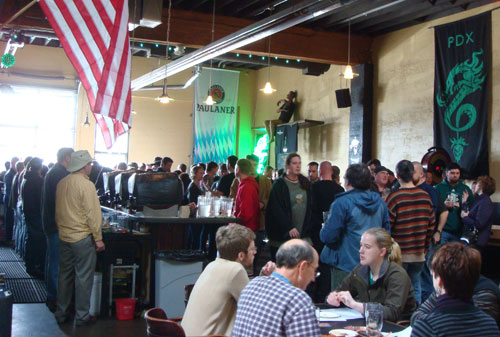 I bought tickets for the 2009 Firkin Fest last month and had forgotten which weekend it was. Ends up it was yesterday, the same day we invited some friends over for dinner. We only had about an hour to take in the fest, but Heather and I are quite skillful at maximizing our weekend activities. So after starting in on cleaning the house and mise-ing en place as many of the paella ingredients as we could, we made our way to the Green Dragon.

Heather was initially skeptical of the Firkin Festival, until I clarified for her that a firkin is completely unrelated to a merkin, the latter being a word my lexicon was blissfully unaware of until yesterday.

We arrived a bit after 3pm. The fest was split into two sessions, the first from 11am-2pm and the second from 3pm-6pm, each limited to 200 person, which seemed at first to be about 100 too many. 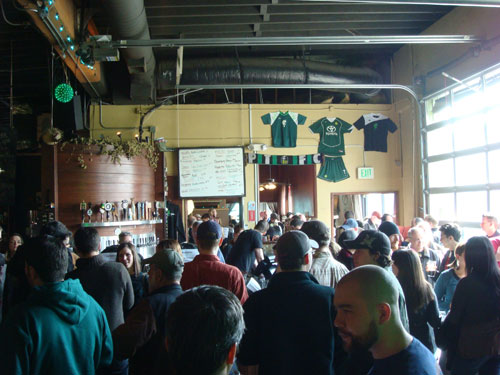 But though it was difficult to jostle through the crowd, and there were not enough places to sit or lean and prop your pint, there were no lines for most of the beers most of the time, which was a pleasant departure from most beer festivals.

The local obsession with IPAs is one of my constant cranky complaints, and unfortunately I’ll have to bust it out again with regards to the 2009 Firkin Fest; about a quarter of the available beers were of that mouth numbingly bitter variety. But we had a limited amount of time and only 8 beer tickets, so we’d be able to work our way around them.

I had my first beers from Brewers Union Local 180, a real ale pub and brewery in Oakridge, Oregon (which is now on my shortlist of places to visit). The North Fork Ordinary Bitter was a creamy and delicious session beer, at a mere 3.4% ABV. Their molasses stout, known as That Dark Beer, was also not too powerful, at 4.6%. It tasted more like wort than beer to me though, and Heather’s “juvenile palate” detected latex paint. But we both agreed the bitter was a very pleasant beer.

Ninkasi‘s Spring Reign pale ale was delicious, as their beers have a tendency to be. The Eugene City Brewery, part of the Rogue empire, served up an Irish red ale, The Hammer Throw, which I also found enjoyable.

But my favorite beer of the afternoon was Bridgeport‘s Raven Mad Imperial Porter. Though I know it’s been available for a while, I had not gotten around to trying it until yesterday. It’s dark and chocolaty, with all the roasty flavors (coffee, chocolate) you’d expect, plus some oakiness from the bourbon barrel aging. I think Lew Bryson’s description sums it up best:

light burnt bitterness to it, a smooth drinkability, and a nicely understated wood/barrel character to it — not an upside-the-head wallop — almost like an ‘easy-drinking’ version of an imperial stout. Once again, BridgePort comes through with a beer that focuses on the drinker and not the person who’s looking to be knocked out in one glass.

Vosges Chocolates provided chocolates, but the only variety made available (at least when we were there) was an abomination: Mini Mo’s Bacon Bar. I’ve ranted before about the bacon dessert fad, but I’ll admit until yesterday I hadn’t actually tried any of them. Well yesterday I took a bite and confirmed my worst suspicion: bacon + chocolate = truly disgusting.

About 4:15 we were on our way, bestowing our remaining drink tickets upon a lucky couple as we departed. I rode a mild, pleasant, beer buzz as Heather embarked on her (not so) Mighty Putty adventure. And we had just enough time to finish cleaning the house and prepping the meal before our guests arrived.