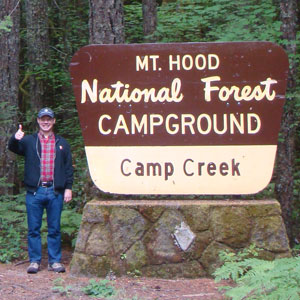 For the second time this summer, Heather and I camped at Camp Creek, a campground a few miles past Rhododendron on Highway 26 in the Mount Hood National Forest.

Our first visit was in June. And it rained. But the camp sites are spacious and surrounded by huge Douglas Firs, and the creek’s babble drowns out all but the loudest semi trucks rumbling by on the hill and tree obscured highway an eighth of a mile north. We were impressed enough in June to tempt weather fate again, but we figured we’d have better odds in late August.

END_OF_DOCUMENT_TOKEN_TO_BE_REPLACED

Labor Day approaches and the summer begins to blur. But as I anticipate the fall festivals I thought it would be a good exercise, and reminder for next year, to list the summer events and festivals I missed this summer that I don’t want to miss next year.

Junction City’s Scandinavian Festival – It was while we were in Astoria in June to attend the Astoria Scandinavian Midsummer Festival that I first heard of it. And I had the vague notion there was a city in Oregon called Junction City. The festival was held this summer from August 12-16, which coincided with a remarkably busy weekend in Portland (of which Heather and I took full advantage). In 2010 the festival takes place August 12 through 15th. No doubt Portland will have much to offer that weekend too, but we’ll take a few hours to drive down I-5 (Junction City is 20 minutes from Eugene) to enjoy an aebelskiver or two.

Portland Adult Soap Box Derby – I’ve wanted to make it to this event for years, but summer weekends fill up fast. Next year I’m going to make the derby a priority. This summer my interest was piqued further by the multitude of local blogger accounts of the event:

Festa Italiana – As I’ve stated before, this is one of my favorite Portland festivals. The only reason we missed it this year is because of a long planned camping trip. We could have gone Thursday, but we can only drink so many days in a row, and what is camping for if not for drinking? We won’t miss the Festa two years in a row though.

Oregon Brewers Festival – I’ve attended numerous times, but the past few visits have made me sour on this festival. It is often excessively hot in Portland the last full weekend in July, and the crowds get so big as to make navigating the area, much less securing a beer sample, an exercise in helplessness. But I know the secret: show up early and avoid Saturday altogether. Next year I shall return . . . hopefully on Thursday at noon!

The first place Portland Timbers take their 23 game undefeated streak on the road Friday, August 28th. The third place Charleston Battery await them. The broadcast, on Fox Soccer Channel, begins at 5pm. The venues below will be showing the game:

For more information, changed venues, and new venues visit the Timbers Away Game Pub Thread on the Soccer City USA Message Board, or check out the Portland Timbers Away Games – Pub Guide at The Nerd is the Word.

With the last game the Timbers officially clinched a playoff spot, so now is the time to get your playoff tickets! Visit the Portland Timbers website or PGE Park box office for more information.

This is one of my favorite Portland festivals, and not just because of the strolling accordionists. I recommend arriving early to secure a table in the beer and wine garden at the top of the bowl on the SE side of the square. You’ll have an excellent view of the stage in the middle of the square. Wine is available by the bottle or the glass; and you’ll find the Festa Italiana drink prices to be more reasonable than at most festivals. Beer is available too. Italian and Italian-ish restaurants from all over set up shop in the square for the festival, offering gelato, pizza, etc.

The entertainment line up is impressive. Musicians from all over regale the crowds with everything from opera to Sinatra, and plenty of accordion. In addition to the music enjoy the grape stomp competition, cooking and pizza tossing demonstrations, marionette shows, and folk dancers. Check out the whole event calendar here.

I got nothing this morning, except for a little bit of alliteration, and some links you’ll thank me for following: