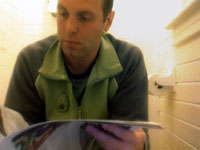 Mike Vogel is working on another movie.

His last film, The Waiting List, a grownup movie about parenting, is making the film festival circuit now.

Mike has also written books and produced several short films (yeah, he’s one of those people, a creative person who actually produces a prodigious amount of creative stuff). And he is also the man responsible for this gem from last winter.

In a recent interview with Rockefeller Fellow and Peabody Award winning producer Dmae Roberts for her blog Funding Your Bliss, Mike talks about his current project, Did You Kiss Anyone?, and the creative way in which he is funding the production.

Everyone worked for “deferred payment” on my first feature, “The Waiting List.” So the second time around, I wanted to at least attempt to secure some sort of funding. After I wrote the script for “Did You Kiss Anyone?” I made a production schedule, budget, and a handsome PDF with headshot photos and charts and all that. But then it occurred to me that I don’t know one person who would drop $10,000 to be an equity investor in a feature, let alone ten or twenty people. But I know a handful of people who might donate $20 or $50, and so if I could target those people and the people they know, then maybe I’d have enough to cover basic production costs. But in order to get those contributors engaged, I wanted to give them something upfront, not just the promise of a movie I hadn’t shot. So, inspired by webisodes like “Wainy Days” and shows like “Curb Your Enthusiasm,” I outlined the first five episodes of “Did You Cast Anyone?” and started asking favors from actor friends.

Read the rest of the interview: Did You Find Funding Yet?

Watch the first webisode of Did You Cast Anyone? below, and catch the rest at Front Ave.