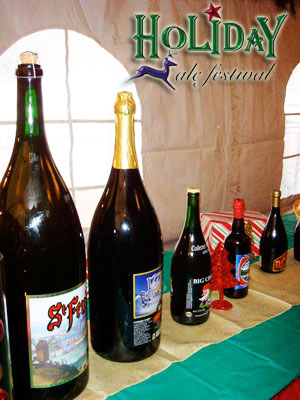 Stay warm and dry and claustrophobic under the big tent. Take the Max home after you enjoy too many beers with too high an alcohol content and too much cinnamon, cloves, and nutmeg.

Actually, there are lots of other choices besides spiced winter ales, as you can see on the official 2009 Holiday Ale Festival Beer List, but be careful: almost everything is strong.

And in addition, there are special beer tappings on Wednesday and Thursday (Friday and Saturday Limited Release Beers will be announced on Twitter / Facebook) and for the Brewers Brunch Sunday morning.

You have to buy an initial $20 tasting package, which includes a mug (bah humbug – previous years’ mugs not permitted), 10 beer tickets and a wristband that you can use to get in “free” for the whole 5 days of the festival. Additional tasting tickets are a $1 each. No kids at this festival, must be over 21 to enter the tent. (More info on the Fest Facts page). And It’s Pub Night has a bunch of great suggestions too: Holiday Ale Fest Advice

Here are the beers at the top of the Dave Knows tasting list: