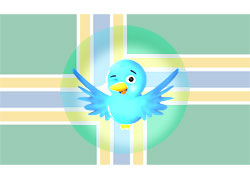 On Twitter, I follow a couple hundred people, mostly other Portlanders (the only celebrities I follow are the important ones: Pee-wee Herman, Weird Al Yankovic, and Sarah Silverman). I’m fairly selective. If you have some connection to Portland, are creative or amusing, or if I know you in real life, I’ll probably follow you. If you spam, spout right wing talking points, or your twitterings are just generically irritating, I won’t.

Blogging takes up a lot of time, people! I listen to a few internet radio shows semi–regularly, but otherwise I don’t really listen to radio, or watch TV. I’ve been to two movies in the past two years (both of which I recommend: Religulous and The Waiting List).

So, really, next to good old fashioned web browsing, Twitter is my main source of information on pop culture, local news, and the modern world.

Due to my limited media exposure, my view of what is going on in Portland, and sometimes the world, is a bit skewed. I dare say I live in a Portland Twitter bubble. Below are 10 of these notions (which there’s a good chance you share if you follow a lot of the same Twitterers I do).

Anyone else have similar notions?