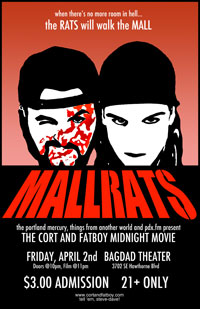 Celebrate the 15th anniversary of the release of Kevin Smith’s Mallrats this Friday, April 2nd, at the Cort and Fatboy Midnight Movie for April. The doors of the Bagdad (3702 SE Hawthorne) open at 10pm, film begins at 11pm. Admission is only $3, and you have to be 21 or over.

Not only is it a cheap excuse to larf heartily at the cartoonish exploits of Jay and Silent Bob whilst supping tasty brews and enjoying all manner of bar food, it’s also a chance to culturally educate yourself on Mid-Nineties Mediocrity. Not just a goofy teen comedy, this movie details the conundrum of Superman’s sexual reproduction, and addresses the problems inherent in spooning, as well as illuminating the discomfort involved when having sex in the back of a Volkswagen Bug. And before you ask: No, the Bagdad will not be offering Chocolate-Covered Pretzels on its menu for the night.

Wow, I didn’t get any of those references. Probably because I haven’t seen the movie. I was going to blame Dogma, one of the worst films I’ve ever seen, but I checked and that came out several years after Mallrats. I did like Clerks though.