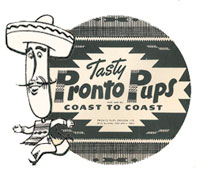 Was the corndog, a stick impaled hotdog coated in batter and deep fried, invented in Oregon?

Versa and George Boyington say they came up with the idea for the tasty snack when a day of traditional hotdog sales was ruined by rain at Rockaway Beach, Oregon in 1938 or 1939.

George Boyington was feeding the mushy buns to the seagulls and asked himself, “Why not cook the bun when it’s needed?” After the weekend’s disaster, he went home to tinker with recipes for a batter-dipped, deep fried hot dog.

George Boyington, putative corndog pioneer, launched Pronto Pups, and began hawking the the wiener dun in the bun at fairs and parks and festivals throughout the country. According to the official history:

The Pronto Pup made its debut from a fountain shop window owned by the Boyingtons in Portland, Oregon. Right from the start, the tasty treat was a crowd favorite; in September 1941, over 15,000 Pronto Pups were consumed at the Pacific International Livestock Exposition.

Pronto Pups is still around, and still headquartered in Portland, Oregon.

But was the Pronto Pup the first corndog?

However, a simple search through the New York Times’ archives reveals that “corn dog” stands are mentioned in a December 7, 1941 article, Florida on $30 a Week. This reference predates the Texas claim. The timing is such that those corn dogs could possibly be Pronto Pups, but the likelihood seems tenuous given that the generic term, corn dogs, was used on the other side of the country only 3 months after the company was launched.

So I dug still a little deeper. With out much trouble (thanks to Google!) I found patent number 1706491, which describes a Combined Dipping, Cooking, and Article Holding Apparatus. The application was filed in 1927 and the patent was issued in 1929. It includes an interesting claim by one Stanley S. Jenkins [emphasis mine]:

I have discovered that articles of food such, for instance, as wieners, boiled ham, hard boiled eggs, cheese, sliced peaches, pineapples, bananas and like fruit, and cherries, dates, figs, strawberries, etc., when impaled on sticks and dipped in batter, which includes in its ingredients a self rising flour, and then deep fried in a vegetable oil at a temperature of about 390° F., the resultant food product on a stick for a handle is a clean, wholesome and tasty refreshment . . .

Sounds an awful lot like a corn dog, no?

So the corndog was not invented in Oregon. Indisputably, however, Portland-based Pronto Pup was one of the earliest popularizers of the foodstuff. And Oregon can claim another corndog related invention that’s easier to corroborate, National Corndog Day! Inaugurated in 1992 in Corvallis, Oregon.