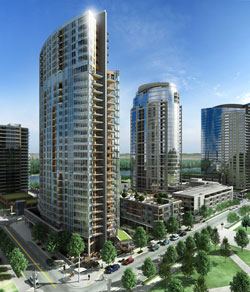 The South Waterfront area takes a lot of crap for being a highrise wasteland of condos no one lives in. But if you live in Portland and want to film a scene with a skyscraper environment without the hassles of random people interrupting your shot, it’s a filmmaker’s dream. The very deadness of SoWat makes it ideal for the budgetless director in Portland (ok, me).

You’ve got skyscrapers, busses, the streetcar, the tram, the river. And now there’s even a really cute park. It all feels pretty generic (in a good way). It could be any city.

Read the rest: South Waterfront is for indies

Like Mike I kinda like the South Waterfront. Sure it cost a lot of public money, but what new development doesn’t? I wouldn’t want to live there, but if I was rich I’d buy one of those bargain basement condos now and come back in a decade or two to see what we’ve wrought. I expect South Waterfront will be the boondoggle that blossoms. And in the meantime we have an urban landscape fit for a filmmaker’s dream!