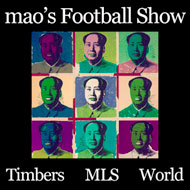 First and foremost we chat about the happenings of the Portland Timbers Football Club. We also delve into the international scene, as well as Major League Soccer and northwest football culture. From time to time we discuss the “beautiful game” with in studio guests, guests from other cities, and even the odd international pundit.

The show hosts are two of the most qualified soccer and Portland Timbers experts you’ll find in these parts:

Michael Orr, aka mao, is a prolific soccer blogger. He is the man behind the indispensable Timbers Offside Blog and the cosmopolitan mao’s Football Blog.

Steven Lenhart, along with his brother Jim “Lendog” Lenhart, founded the Timbers Army [no, really!]. He’s a long time football fan, and Portland based photographer.

On Twitter they can be contacted @maofootballshow, and listen in Tuesdays at 4pm on Cascadia.FM!