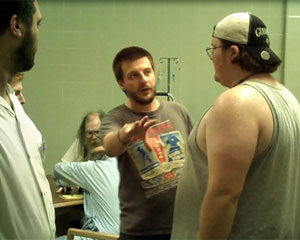 James vs Reality is set to premiere November 9 2010 at the Bagdad Theater (3702 SE Hawthorne). Local filmmaker and 3D animator Chris Wilson produced, wrote and directed, along with Tim Feeney, this visual effect packed funny short film, which tells the story of a chronic escapee mental patient who just happens to think he is a super hero.

The We’ll Fix it in Post Productions team has spent the last two years on this ambitious project, and is offering the premiere free of charge to the public. It’s an event, featuring in addition to the film’s debut, local entertainers and artist performing live as well as an after screening meet and greet with the cast and crew.

Chris generously agreed to talk about James vs Reality, his other projects, and filmmaking in Portland with Dave Knows Portland.

In the trailer for James Vs. Reality there’s an amazing shot of Portland’s Union Station tower being hit by a plane (or something). Can you give us any clues as to which other parts of Portland get blown up in dramatic fashion in the film?

James Vs Reality Trailer from Chris Wilson on Vimeo.

Most of the end of the film is set at Union Station where a huge showdown occurs. Planes fall from the sky and crash into the buildings around Union Station and the tower itself doesn’t fair well, to a much larger extent than what is shown in the trailer. The other areas that get damaged aren’t nearly as iconic, but we see some of the Pearl and North Portland being mangled.

You say James vs Reality is your first live action film, but what about Every Rose Has Its Thorn?

Every Rose Has Its Thorn from Chris Wilson on Vimeo.

I don’t like to talk about Every Rose Has Its Thorn! That was actually just an early camera test. We’d shot James vs Reality with a camera guy and his equipment for six months, but were unhappy with the quality of the film. We parted ways, taught ourselves how to use equipment and came back to the project doing things on our own. Instead of just randomly shooting anything as practice, we shot Every Rose, which was also designed to be a practice piece for creating the visual effects that I needed for James vs Reality.

Do you have an academic background in film making?

I have a Bachelor’s Degree in Media Arts and Animation, which means I had one film class that dealt with film, a handful of animation classes and a ton that dealt with graphic design, typography and the history of fabrics. I never worked with lighting, microphones or editing, but I could tell you all you’d ever want to know about the theory of fonts. A lot of what I know in 3D, visual effects and film making have come from just going out and doing it. I really think that’s the best way to learn!

I remember seeing the trailer for Jurassic Park on TV as a kid and saying to myself ‘That’s what I want to do.’ A teacher at the time, Kim Palmer, allowed me to start making filmed projects for her classes and encouraged me to push into this further. It was a wonderful way to get excited about film making, while at the same time getting out of doing real homework. From there, I started moving towards going to college for animation. 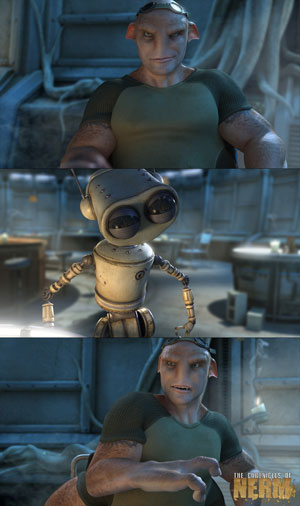 You’re also working on an animated film, The Chronicles of Nerm, which is a sequel to The Adventures of Nerm and BG. I watched the latter recently and found Nerm to be a really annoying character. Are you sure anyone wants to see a sequel? </joking!>

The biggest complaint I got from the original Nerm film was how annoying the character is. While ultimately that is the point of the character, I also don’t want to turn off the audience. So the character was changed slightly for the sequel, plus I ramped up the violence towards Nerm massively. It should be refreshing to the audience to see Nerm be ripped limb from limb, shot and decapitated…and that’s only in the first 2 minutes. The end of the film turns into a giant WWF brawl… With folding chair.

I feel so lucky to have this cast for The Chronicles of Nerm. It’s only the second animated film I’ve done, but four Hollywood film and TV actors and actresses came aboard, including Zoë Bell, one of the leads from Tarantino’s Death Proof, Lost and many other huge projects. I’m not sure what the hell these people were thinking, but I’m so honored to have them!

How many hats do you wear in James vs. Reality?

I’m the co-writer and co-director with Tim Feeney on James vs Reality, but I’m also editor, did all the color correction, a lot of the sound and music. I worked with 3D artist Malcolm Burke for one key element, but did almost all of the rest of the effects myself. While I’ve done a lot of 3D work in the past, this was my first time doing visual effects. It was always a challenge, but ultimately the main thing that people will most likely be most impressed with. Considering this is a short film, there is a massive amount of action and effects. I believe this may be the first disaster film set in Portland!

What made you want to write a film like James vs Reality?

Tim and I had seen quite a few independent films from the area that just aren’t the type of film we really enjoy going to a theater and watching. Comedy, action and especially projects with visual effects are hard to come by in the indie world. So we wrote something we’d like to go see; an incredibly fast paced movie that will excite you and make you laugh, a huge spectacle film! That being said, there’s several filmmakers in town that are doing some very exciting (and funny) projects, like Mike Vogel‘s hilarious Did You Kiss Anyone and Zach Persson‘s sci-fi epic Ingenium.

Why do you work in Portland? Why not LA or NYC?

I’ve had a few offers to go work at big animation studios in LA, but I’d much rather be able to work on my own projects. And I think there are some great opportunities that you have in Portland that you just wouldn’t have in LA. Since there are very few films from here, people seem much more tolerant to filming around town. I think securing locations, going out and shooting on the street and such is much easier than it would be in LA where everyone assumes you have money and permits. We did a lot of stupid crap on this film, from blocking off entire blocks in downtown to driving our lead actor around on the top of a car at high speeds. The most the police ever said to us was ‘try not to get hit.’

James vs Reality premieres on Tuesday, November 9. After this no doubt amazing event, how will you be distributing the film?

We’ll have DVDs for sale at the premiere, packed with four hours of bonus craziness, but due to restrictions with our festival run we are unable to do a widespread distribution at this time.

I plan on finishing up The Chronicles of Nerm while writing my first feature film, Charlie vs the Cougar, a romantic comedy about people punching each other in the face in Alaska, but put some of my weird spins on it. I’ll even try to sneak an explosion in.

Keep up with Chris Wilson at Chris Wilson Online and We’ll Fix It In Post Production. And come to the premiere of James vs. Reality on November 9, 2010 at the Bagdad Theater (3702 SE Hawthorne). Party begins at 8:30pm!