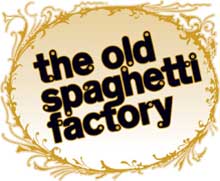 The Old Spaghetti Factory has expanded impressively since its founding, now boasting over 35 domestic locations, plus a presence in Canada and Japan.

FWIW, the restaurant was never known as “The New Spaghetti Factory,” even in 1969, when that title would have been more accurate.