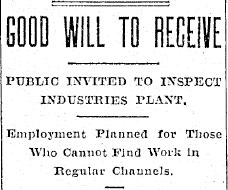 Goodwill Industries was founded in Massachusetts in 1902 by a Methodist minister, Rev. Edgar J. Helms.

Helms collected used household goods and clothing from wealthier areas of the city and then trained and hired the poor to mend and repair the used goods. Those items were then resold or given to the people who repaired them. The system worked and the Goodwill philosophy prospered.

The Morning Oregonian reported on the formal opening of the Portland Goodwill on May 31, 1927:

Portland Goodwill Industries, recently organized, will hold its formal opening today from 2 to 9 P. M. in its building at First and Grant streets. Tea will be served. The reception is being held to acquaint the public with the work the new industry will do.

Goodwill Industries continues to operate in Portland, and around the world. In 2010 the non-profit organization provided workforce development services for over 20 million people. Over 170,000 people earned jobs with Goodwill’s help, and Goodwill organizations generated $4 billion in revenue, 84% of which was spent directly on programs.