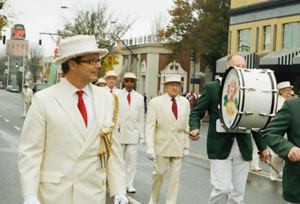 Vernon, a veteran himself, served as a medic at the Veterans Hospital in Vancouver, Washington during World War I. In World War II, he served as a captain in the Veterans Guard & Patrol. Vernon was very active in many Veterans organizations. Like the American Legion Post No. 1, Forty & Eight Voiture No. 25, Portland Barracks No. 53 of the Veterans of World War I and the Last Man’s Club, to name a few.

Vernon E. Ross purchased a small triangular piece of land for $19,000 in front of his Ross Hollywood Funeral Chapel and erected a Flag pole with a planter.

He said, “I wanted to do something to honor veterans of all wars, because “patriotism” has dropped to the lowest level ever.”

Mr. Ross passed on Veterans Day in 1983, but the chapel and community volunteers have maintained the tradition.

This year’s parade starts at NE 40th and Hancock at 9:45am (assembly time is 9am), and proceeds to 48th and Sandy and the Ross Hollywood Chapel’s Veterans Memorial Flag Pole for flag ceremonies and guest speakers.