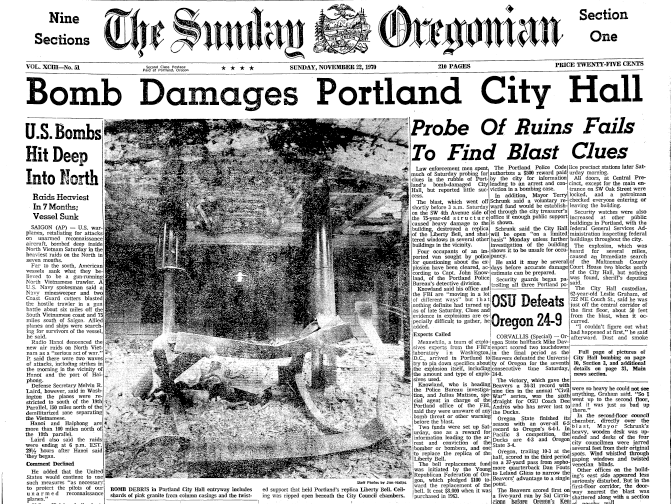 In the early morning hours on Saturday, November 21, 1970 a powerful explosion ripped through the east entrance of Portland’s City Hall (The Sunday Oregonian, 22 November 1970).

The blast, which went off shortly after 3am Saturday on the SW 4th Avenue side of the 75-year-old structure caused heavy damage to the building, destroyed a replica of the Liberty Bell, and shattered windows in several other buildings in the vicinity. . .

The City Hall custodian, 62-year old Leslie Graham, of 733 NE Couch St., said he was just off the central corridor of the first floor, about 50 feet from the blast, when it occurred.

“I couldn’t figure out what had happened at first,” he said afterward. Dust and smoke were so heavy he could not see anything, Graham said. “So I went up to the second floor, and it was just as bad up there.”

In the second-floor council chamber, directly over the blast, Mayor Schrunk’s heavy, wooden desk was upended and desks of the four city councilmen were jarred several feet from their original spots. Wind whistled through gaping windows and twisted venetian blinds.

No group or individual ever claimed responsibility for the Liberty Bell bombing, and the culprits were never identified. 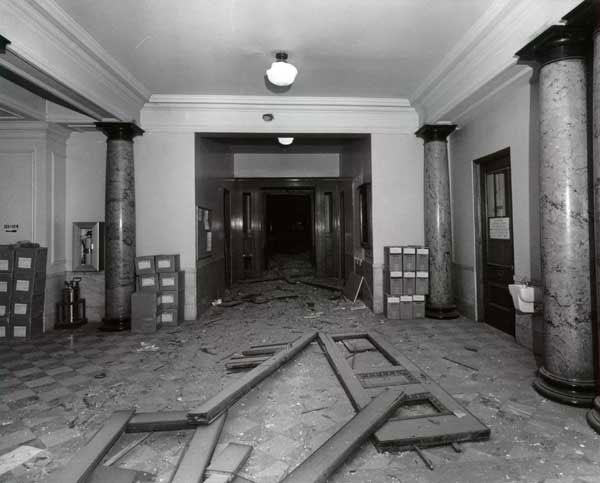