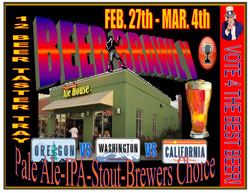 Stop in for a 12 BEER blind Taster Tray featuring the best Pale Ale, IPA, STOUT, and Brewers Choice Beers each STATE has to Offer.

Try the beers and submit your ballots at the pub from Monday, February 27 through Sunday, March 4, 2012. 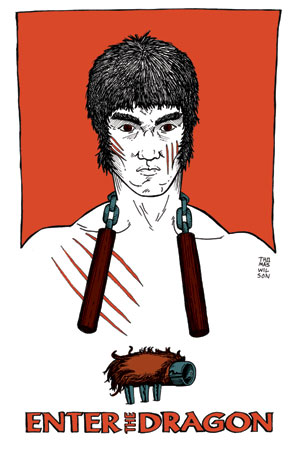 I don’t know how we managed to run this thing six years without it occurring to us that we’ve never shown a kung-fu flick before. We’ve shown pretty much every style, every genre, and somehow, the martial arts have escaped us. We’ve shown action, drama, comedy, and musical, but we’ve never put on a legitimate ballet of brutality, flurries of fists and feet whistling across the screen like a hurricane of pain.

Watch Jim Kelly create an instant legend. Watch John Saxon smarm his way into America’s heart. But most importantly, watch BRUCE LEE wreck what seems like three million human beings (including Sammo Hung and Jackie Chan, who appear as stuntmen in the film) in three million different ways. But he’s not all sneering death and destruction. The man was a teacher, and there is much to learn from ENTER THE DRAGON.

So on March 2nd? Be like water. Pour yourself into the Bagdad Theater, and focus, or you will miss all that heavenly glory playing out on the big screen, the way it was meant to be seen.

Go to CortAndFatboy.com for more information, podcasts, and film commentaries for this and previous midnight movies.

Should be a fun Portland weekend – there’s a beer fest, a chowderfest, and a lot of fun option on Saturday. Winter isn’t all bad! 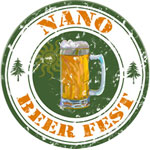 And there will be food carts! [more]

Hillsdale Brewfest and Battle of the Belt

The 19th annual Hillsdale Brewfest and Battle of the Belt takes place this Saturday, February 25, 2012 from 11am until late at the Hillsdale Brewery and Public House (1505 SW Sunset Blvd).

Twenty-two brewers from the vast McMenamins empire bring specially brewed beers to the festival Saturday to be judged (and enjoyed) by festival patrons. [more]

Admission to the competition is free, and attendees 12 and older can purchase sample trays for $10 to participate in the tasting. All proceeds will be donated to the Community Transitional School, which provides educational services to homeless and at-risk children. [more]

Hosted by Shelley McLendon and B. Frayn Masters (of Back Fence PDX fame), Entertainment for People is a highly entertaining variety show that offers a snack-sized smorgasbord of music, weird stuff, film, readings, comedy in all forms, and booze. [more] 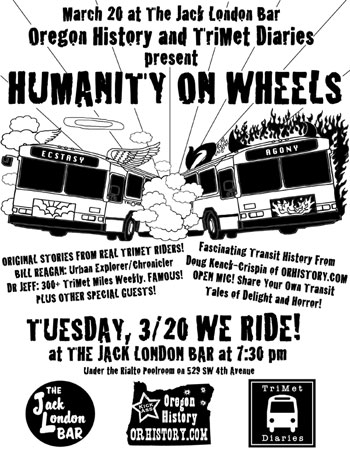 Kick Ass Oregon History is pleased to partner with TriMet Diaries in offering for your amusement and education… “Humanity On Wheels; an Evening of Mass Transit Tales!” . . .

On this evening we will revel in Mass Transit Glory with the following distinguished speakers:

www.orhistory.com‘s Ribald Resident Historian Doug Kenck-Crispin, who has publicly commuted downtown daily since 1984, will tell the yarns of TriMet’s history, being sure to leave in all the gory details!

Bill Reagan will share his findings as a devoted Urban Explorer and Chronicler.

Jeff Guardalabene, or just Dr. Jeff will regale the swooned audience with his tales of TriMet adventures, and perhaps channel some tattered beat generation musings on public transportation.

Other Special Guests shall surely arrive (with transfer in hand, of course) and an Open Mic session shall round out the evening – where you too can share your Mass Transit Stories, both angelic and satanic in nature.

Won’t you join us? Conveniently located in the heart of the formerly “fareless square.”