Your Portland Timbers face the Rochester formerly raging Rhinos in a Thirsty Thursday matchup May 14th. Kick off for this game is 8pm – time for several more Sessions at Bitter End Pub (1981 West Burnside).

Also, both Friday and Saturday nights at 7pm, the Timbers U-23s face opponents in US Open Cup qualifying matches at PGE Park. Spokane visits Friday and Yakima on Saturday. Hat tip to Paul!

Zompire: The Undead Film Festival takes place this weekend at the Hollywood Theatre (4122 NE Sandy Boulevard) Friday through Sunday. Andrew Migliore, the creator of the H.P. Lovecraft Film Festival brings us films of zombies and vampires this time. 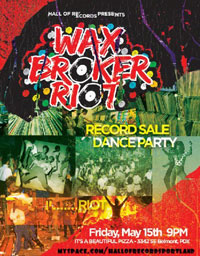 Like the first two, this one will also be hosted by It’s a Beautiful Pizza (3342 SE Belmont). And once again DJ Standing 8 will be mixing while you enjoy a beer and dig for records (mainly soul, funk, jazz and breaks from the 60s and 70s).

The party is true to the (eventual) store concept: blending records with beer – don’t forget to track Hall of Records’ progress towards this goal at their blog: The Creation of a Record Store.

The 2009 featured artist for 2009 is Thelma Johnson Streat (pdf), and the theme this year is Coming Home.

Celebrate Norwegian Constitution day Sunday, May 17 at the Norse Hall.