Pixieland was a short-lived amusement park on the coast inspired by a longstanding destination restaurant in Lincoln City called the Pixie Kitchen. The whimsical restaurant, with a funhouse mirrors entryway and an internal courtyard occupied by colorful mechanical pixie characters, opened in the 1930s and closed in the mid-80s. The amusement park had a much shorter life span, opening in 1969 and closing a few years into the early 70s (and now its remnants are disappearing into reclaimed wetlands).

Radio Gretchen mentioned recently at OurPDX that the Pixie Kitchen held magic for her as a child. What the Pixie Kitchen had in store for me as a child was my first food poisoning. I had ordered some type of child-sized fried fish platter and ended up retching it all up a few hours later at a motel with my family as cold chills wracked my body. I couldn’t be in the same room with clam strips or popcorn shrimp for years after. Any time we drove by the restaurant in future family travels, I shuddered and looked away. 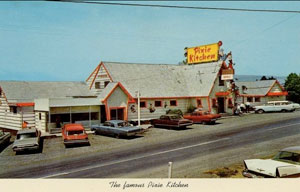 Don’t worry, there’s no reverse peristalsis, that I can recall, in my next memory.

This one involves Pixieland, though I have zero recollection of The Franz Bread Rest Hut, Darigold Barn, or Little Toot, as dutifully, and playfully, documented at PDXHistory.com.

It’s not even really a memory, it’s a photograph. A photograph of my dad, my oldest sister, and me at Pixieland. 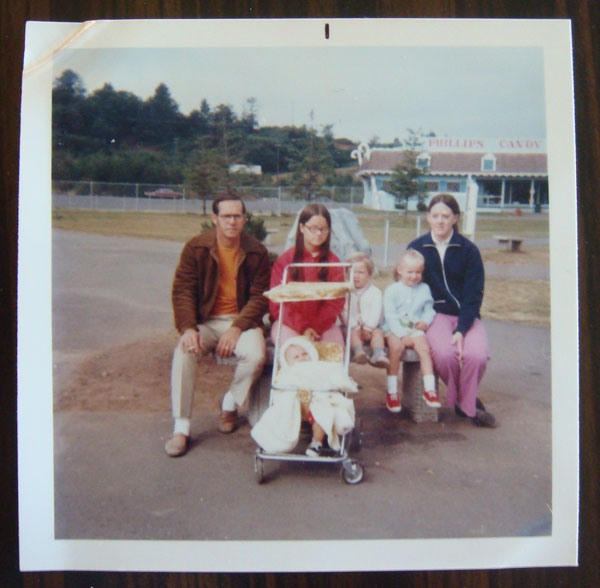 That’s my dad on the left, my sister Boni next to him, and some other people I don’t know on the right. I’m the bundled up grump in the stroller.

Not surprisingly I have no memory of that day. I look about a year old in that photo, no? So that would have been in 1972 or 1973.

So, despite the fact my Pixieland memory is not something I actually recall, I prefer it to my more immediate memories of Pixie Kitchen. I’m sad they’re both gone, but I am relieved that nowadays I can keep my lunch down when passing through Lincoln City.