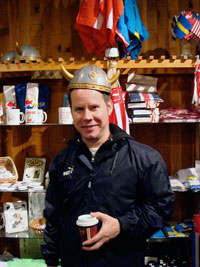 Heather and I attended the Scanfest for our first time last summer, [that’s me pictured, preparing for the 2009 fest with strong coffee and appropriate head gear] and we had a blast. Read her account of our adventure:

This year’s festivities begin Friday with the Coronation of Miss Scandinavia, the torchlight procession to the bonfire to burn hexes representing bad luck, and the queen’s ball. And also very importlantly, on Friday from 9-11pm Beer-drinking Music is scheduled for the Beer Garden.

Saturday‘s events include the Optog, a walking parade through downtown Astoria. And the raising of the midsummer pole followed by ring dancing, and an evening open dance.

Music and dancing take place throughout the festival, all days. Entertainers include the Sigtuna Brass Sextet from Sweden, the Karelian Folk Music Ensemble from Finland and Russia, Pekka and Perttu from Finland, and the Ultima Thule Choir from Norway. Vendors will be on hand selling handcrafts and imported items from Scandinavia. And don’t forget the Aebelskiver (Scandinavian donut), Krumkakke (crisp flat cookie rolled into cone shape), Lefse (flat bread with butter, cinnamon and sugar), Riisipuuro (rice pudding with fruit soup), and more!

Sunday the festival wraps up with a Pannukaku Breakfast and more music and fun.

And I’ll leave you with one of the highlights of last year’s festival: Kerry Christensen, Master Yodeler performing the The Norwegian Cow Song!