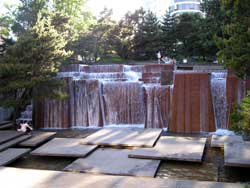 Drink beer. Many bars are air conditioned, some have fantastic patios. All sell cold beverages.

Jump in a fountain. 18 city parks feature fountains, many of which (but not all!) you can jump into. The old-school favorite is Keller Fountain Park (SW 3rd and Clay) – lots of shade too! And of course if you like screaming kids the Salmon Street fountain at Waterfront Park perfectly matches your needs.

Jump in a pool. Though summer weather only really starts after the 4th of July, Portland’s outdoor pools opened in June!

Lounge in a hammock or lawn chair. If you’re smart, you abhor physical activity when it’s hot. Your Portland home probably doesn’t have AC, so it’s ridiculously hot inside. If you’re outside, 100 degrees isn’t that bad if you are lounging in a hammock under a shady tree with a cooler full of beer within reach. When it’s really hot it’s usually breezy too and humidity is rare around here . . .

Take public transit if you’re going anywhere. No, seriously. Avoid traveling on foot, by bike [unless you only ride down hill], or by car. The vast majority of TriMet’s fleet has pretty good AC (if that ass hat in the back will close the goddamn window), and the bus will probably be cool the moment you step on. Let the bus driver deal with the stressed out and overheated car drivers; that’s his job.

Whine about the heat [a Mile73.com classic from 2008!]. It won’t make things cooler, but it’ll make you feel better.

Any other ideas? Please leave your tips below!