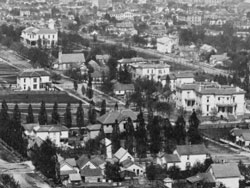 The Architectural Heritage Center presents The South Park Blocks: The Evolution of a Portland Neighborhood.

Pioneer Daniel Lownsdale had a visionary plan of a greenway that would extend from Portland’s northwest waterfront to the southwest hills. Unfortunately, his dream never came to fruition and Lownsdale’s park block property was lost to litigation after his death.

During the past 130 years, property facing the South Park Blocks—the area to the south of Salmon Street—has consistently been used for educational, religious, cultural and residential purposes. Grand mansions and smaller residences later became boarding houses. Some of these houses were removed and were replaced by surface parking lots. In some cases these parking lot properties were later redeveloped into housing. Portland State University (PSU) has grown to cover most of the property south of Market Street. PSU has re-purposed many properties, including the former Shattuck Elementary School and Lincoln High School, as part of its expanding campus.