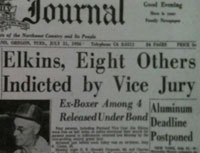 The title of the intriguing sounding July 26th, 2010 edition of History Pub at the Kennedy School Theater (5736 NE 33rd) is Dark Rose: Organized Crime and Corruption in Portland:

In the mid-1950s, Portland’s dirty laundry was aired for the whole nation to see, when The Oregonian broke the sensational story of organized crime rackets, Teamsters Union involvement, and corrupt law enforcement officials, using information provided by the city’s infamous crime boss, James B. Elkins. Quickly, Portland was made the debut case in the U.S. Senate Committee investigation of racketeering by union officials in cities around the country. No less than Robert F. Kennedy oversaw the proceedings.

The presenter is Robert Donnelly, Professor of History at Gonzaga University, and author of the forthcoming book, Dark Rose: Organized Crime and Corruption in Portland, Oregon.

The program begins at 7pm, and goes about two hours.