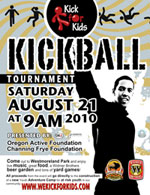 Come out to Westmoreland Park on Saturday, August 21 2010 for the Kicks for Kids Kickball Tournament, presented by the Oregon Active Foundation and the Channing Frye Foundation. Games start at 9am.

Thirty-six (18 and over) teams will compete in round robin and elimination tournaments hosted by Recesstime Sports.

You can also just go and watch, as there’s a Widmer beer garden, prizes, food, raffles, music, and an after party! There’s even a Kids Village for the kids. All proceeds go to the construction of a new Youth Adventure Camp for at risk youth.