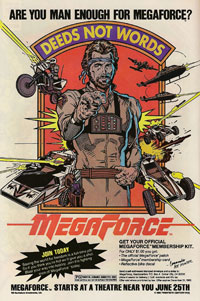 The peace-loving Republic of Sardun is facing constant incursions from hostile neighbor Gamibia. Unwilling to retaliate and initiate war, high-ranking Sardunian military officials Major Zara and General Byrne-White arrange a rendezvous with MegaForce, a hi-tech and super-secret phantom army of top-shelf fighting men from all over the world, to ask for help in ending Gamibia’s attacks. Ace Hunter, leader of MegaForce, is happy to take on the job as he has a past with Gamibian military leader Duke Guerrera, an old military academy friend who turned to evil.