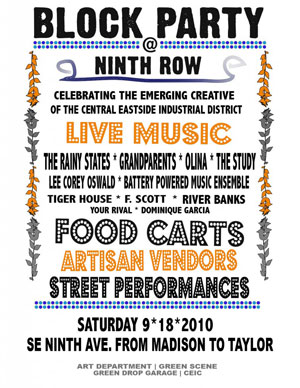 Come on out Saturday, September 18 2010 to SE 9th Avenue between Madison and Taylor for the Block Party at Ninth Row!

Sponsored by the ART DEPARTMENT and the Central Eastside Industrial Council and local businesses, this free, all ages non-profit party takes place from 11am until dark.

The event will conclude with an after party at the ART DEPARTMENT warehouse at 1315 SE 9th Avenue with surprise musical guests and a film screening.