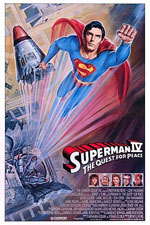 This week’s film? The only film with Christopher Reeve a superman that I haven’t seen: Superman IV: The Quest for Peace (1987)

Superman is bored so he’s hurling nuclear missiles into the sun. Lex Luther makes a super glam dreamboat from the sun and Superman’s hair. Superman fights the sun man (Nuclear Man) on the moon and stuff.

One should also note that the actor who played Nuclear Man is named Mark Pillow.