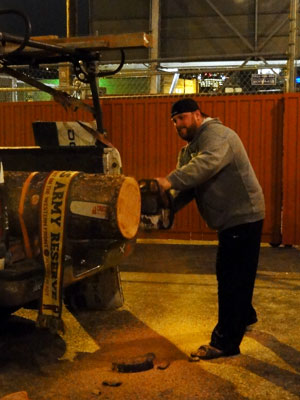 As we sat sipping [intentionally] sour beer and folding song sheets with Timber Jim at the Barrel House on Thursday night, we felt relatively confident in the Portland Timbers‘ success. Before kickoff Timber Joey led us out front to a log sticking out the back of his pickup truck. He fired up the chainsaw and lopped off a ceremonial slab. Oh yeah, we were feeling it.

The first moment we sensed something wasn’t quite right, however, was when the television tuned to Fox Sports Net . . . displayed a technical difficulties notice. In the next few moments those of us following along on Twitter learned that Vancouver had gone up 1-0 in the first minute of the match – things were not looking good, even though we couldn’t see them.

Soon FSN got their act together, however, and we cheered as the boys appeared on screen . . . only to see them give up a penalty kick a minute later (it seemed – but really it occurred in the 13th minute).

You know the rest. The Portland Timbers now find themselves two goals behind as they face the Vancouver Whitecaps in the second and final leg of the quarterfinal series at Merlo Field tonight. Kickoff is at 6pm.

As long as they are up two goals, Vancouver only have to play defense; they can, and probably will, keep 10 guys back. Here’s hoping the Timbers score early to force their hand. The winner of the series will face Puerto Rico in the next round.