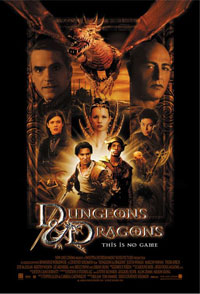 Join host Will Radik and guests as they provide commentary to accompany my favorite crappy movie of all time: Dungeons & Dragons!

Empress Savina Rules over the magical empire Izmer. The young thieves Ridley and Snails get involved with her quest to find the legendary Scepter of Savrille. With this most desirable magical wand she could have the power to rule over the Red Dragons and she would then be able to provide freedom and equality amongst all people. Ridley and Snails are closely followed by Damodar, the cruel assistant of Profion who is longing for the power of the Scepter. Profion wants to get into battle with the Empress. Whenever Profion would get his hands on the Scepter, the whole empire would then forever live in darkness. The future depends on the braveness of Ridley and Snails…

Why, you ask, is this my favorite crappy movie of all time? Jeremy Irons! You will rarely see an actor having so much fun in a role as Jeremy Irons so clearly is having in his role as the evil mage Porfion. At any moment, as he hams it up to extraordinary levels, I expect a smirk to appear on his lips or for him to break out in a laughing fit. Somehow, he stays in role.