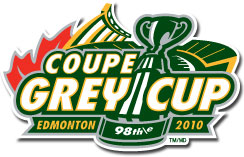 In a rematch of last year’s Cup, defending champions Montreal Alouettes face the Saskatchewan Rough Riders. This year’s Grey Cup game will be played at the Commonwealth Stadium in Edmonton, Alberta. And the half time entertainment is provide by Bachman & Turner!