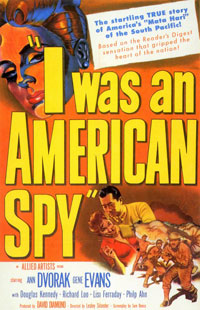 Phillips’ espionage and humanitarian activities in the Philippines during World War II earned her fame, high honors and the gratitude of prisoners of war whose lives she saved. She risked death to help them and to collect vital intelligence for the war effort, found and lost her true love, endured brutal torture, escaped execution and lived to publish a riveting autobiography that inspired a Hollywood film.

The film was I Was An American Spy, starring Ann Dvorak. Claire Phillips co-wrote the autobiographical book Manila Espionage. In 1951, the same year the film was released, Claire Phillips was presented with the Presidential Medal of Freedom, upon recommendation of General Douglas MacArthur.

This History Pub is free and open to all ages. Presentation begins at 7pm. Bring a canned good for the Oregon Food Bank!