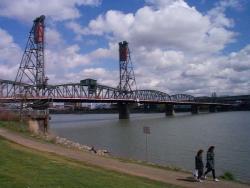 In anticipation of the 100th anniversary, the organizers of the PDX Bridge Festival have assembled an exhibit: The Bridges That Build Portland, that highlights the first ferries and bridges that connected east and west Portland.

The exhibit can be viewed at the AIA Portland Center for Architecture (403 NW 11th) from December 2 through 14 2010 (hours are 9pm-5pm Monday through Friday). A special opening reception, takes place from 5-7pm on Thursday, December 2.

Via the the Hard Drive blog at OregonLive.com