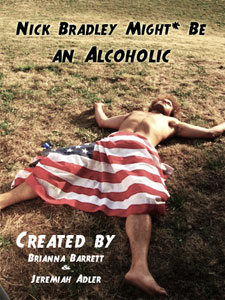 The pilot centers on an irresponsible young man, Nick Bradley (Gavin Bristol), who is named CEO of his father’s company the morning after he drunkenly crashes his car, and is sentenced to three-thousand hours of community service and a mandatory alcohol recovery program.

Brianna Barrett and Jeremiah Adler wrote and directed the pilot for only $4,000, and filmed around the Portland area with a local cast and crew. The pair took the almost finished product to LA for post-production, where it was well received. The show is making the rounds.

The Bagdad doors open at 5:30 and the show starts at 6:30. Arrive early to meet the cast and crew. There will also be a post-show Q&A with the directors and several cast members. Tickets are free but please consider donating $5 to cover the venue costs!

For more on the story of how a couple young Portlanders created a television pilot, read Peter Ames Carlin’s article in The Oregonian, Portland-made ‘Nick Bradley’ might be a TV series, and Local filmmakers pitch ‘Nick Bradley’ pilot by Geoff Pursinger in the Portland Tribune.