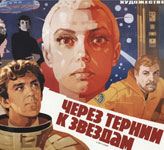 When Soviet Starship Puskin discovers Neeya in suspended animation in a blown-out, derelict ship, Dr. Stepan Lebedev takes her home to live with his family. But Neeya, it turns out has fabulous hidden powers. (Like He-Man) What’s more, she’s an artificial human, with a built-in, compulsive purpose, which is to seek the home planet of her creator and fight an evil capitalist midget