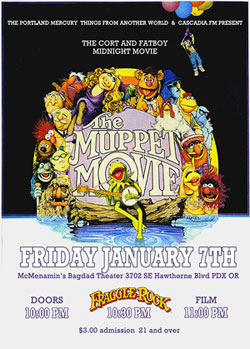 The first Cort and Fatboy Midnight Movie of 2011 is The Muppet Movie!

McMenamins has secured a 35mm print of the 1979 classic “The Muppet Movie,” starring Kermit The Frog, Miss Piggy, Fozzie Bear, Rowlf The Dog, Dr. Teeth and the Electric Mayhem, and about 15 metric tons worth of celebrity cameos. Along with this bit of cinematic genius (“The bear is driving a studebaker! The Frog is riding a bike! What is the weird thing doing with the chickens?”) The film will be preceded by a DVD screening of “Wembley and the Gorgs,” an episode from Henson’s 1980’s children’s series Fraggle Rock.

Cort and Fatboy invite you to feel free to sing along as loud as you want, if you can make it through “The Rainbow Connection” without sniffling and getting some dust in your eye.