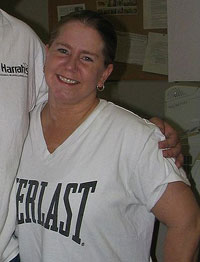 On this day in 1994, Shane Stant took a collapsible baton to Nancy Kerrigan‘s knee after one of her practice sessions at the U.S. Figure Skating Championships in Detroit, Michigan. Why is this pertinent to Oregon history? Because ends up the masterminds of this dastardly attack were Oregon figure skater Tonya Harding‘s husband, Jeff Gillooly and her bodyguard Shawn Eckardt, who hired Shane Stant to break Kerrigan’s leg so Tonya’s most formidable competitor of that era couldn’t skate.

Really, if the media, especially in Portland, had any access to you at all in the mid-90s, you know all this.

Tonya was ultimately convicted of hindering the investigation, but her criminal ways weren’t over. In 1995, abetted by Portland radio station Z100, she assaulted the ears of music fans in Portland, Oregon as the lead singer of the pop band Golden Blades. Fortunately before too much damage was inflicted the victims booed her off the stage.