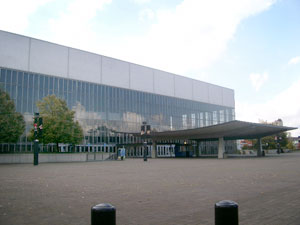 Portland’s Memorial Coliseum opened on November 3, 1960. But it was on January 8, 1961 that it was formally dedicated to the memory of Portland’s war dead.

An Oregonian article on January 9, 1961 describes how the event’s master of ceremony, Edwin H. Norene, said the dedication marked the

realization of a plan to put here something of enduring nature in memory of Portlanders who fought in World War I, World War II, Korea and the Spanish-American War.

there would never be another world war and that no names would have to be added to those of the more than 1,600 men and women who died in military service and are listed in the honor roll book in the Memorial Chapel of the coliseum.