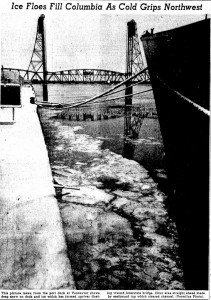 Snow fall was heavier in Oregon in January 1950 than ever before recorded (record keeping began in 1890).

Three snow storms came through the state that month, but most of that snow began falling on January 9.

Accompanied by wind on the 13th, snow drifts covered, and closed, all the highways west of the Cascades and in the Gorge. An ice storm followed on the 18th, downing trees and power lines and covering roads.