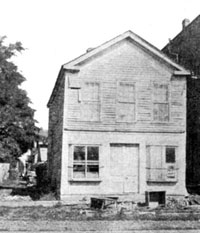 The Oregon Territorial Legislature, on January 13, 1855 voted to move the capital from Salem to Corvallis (after making the switch from Oregon City to Salem only 3 years earlier).

Governor George Law Curry and others objected, however, and once the Feds got involved the move was nixed. But in those days it took awhile for messages to get across the country, so not until December, when the legislature convened in Corvallis, did they vote to move back to Fed-approved Salem.

Interestingly though, a few days after Christmas, the Salem statehouse burned down. In June 1856 the public voted on where they wanted the capital to be (presumably aware that the US Congress would have to approve their decision). Eugene and Salem were the top vote getters (after some shenanigans with invalidated ballots for Corvallis). Eugene actually won the runoff, but voter turnout was very low and the election was, basically, ignored. Salem has been the undisputed capital of Oregon ever since!