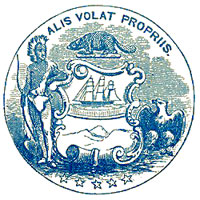 The Oregon Territorial Legislature on January 18, 1854 adopted as the Oregon Territory motto Alis volat propriis, which translates to She Flies with Her Own Wings (or He flies or It flies, to be exact, but states, like ships, are conventionally referred to in the feminine).

The phrase was originally coined in English, by Judge Jessie Quinn Thornton, but the Latin version is what ended up on the Seal of the Oregon Territory.

Puzzlingly in 1957 the Oregon Legislature adopted as the state motto The Union. Fortunately in 1987 they changed it back, noting that the motto appropriately reflected the independent character of the Oregon pioneer settlers who established their own government.