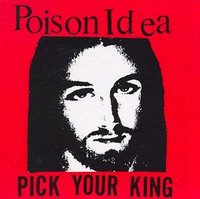 [The album] squeezed 13 songs onto a seven-inch vinyl record. The best of the bunch — and they’re all great — is a minute-long blast called “This Thing Called Progress.” Roberts sprints nimbly through the chord progressions, creating a hummingbird ostinato while the rhythm section cuts in and out. And Jerry A. roared lyrics that could, with their odd mix of glee and loathing, have been the band’s manifesto: “Have fun this time around because it might be the last/ This thing called progress makes me sick.”

The 7″ was recorded at Recording Ass in Portland and released by Fatal Erection Records.