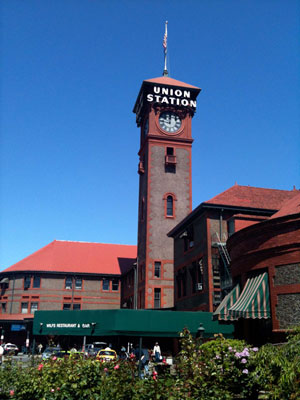 Workmen transferring contents from the nearby old terminal, which was being dismantled, were impeded in their work by crowds of gawkers excited to explore the new station.

This caused the management to wish it had kept the doors locked one day longer. However, all kept their tempers and gave way to the visitors, being recompensed or reconciled, perhaps, by the many flattering compliments which were liberally bestowed upon the commodious and handsome structure.*

Nevertheless the afternoon Salem train left on time at 4pm.

Railroad man Henry Villard had spearheaded efforts to create a grandiose train depot in Portland – the original plans would have made it the largest depot in the world (which would have just been silly, but well in line with the hubris of some of the Portlanders of the era).

Due to financial issues we ended up with the much more modest, but grand nonetheless, Union Station we see today.