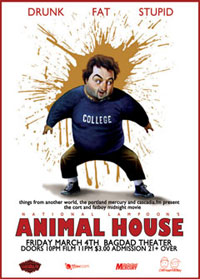 The March 2011 edition of Cort and Fatboy’s Midnight Movie is the John Belushi classic: Animal House.

The film that made John Belushi a star, and – like it or not – solidified the college experience for many a young man and woman. It is to frats what The Godfather was to gangsters: It may not have been all that accurate a portrayal of college life (it wasn’t) but many a pledge afterwards tried to live their college years like the Deltas did. Of course now, college looks a lot less like Animal House, and a lot more like The Social Network, and we’re probably better off for that.

Unless you’re on double secret probation, you can’t afford to miss this one!