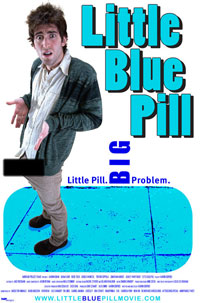 The Erectile Dysfunction and male enhancement industries are overripe for satire and parody. Drugs designed to help people with Erectile Dysfunction are the butt of many jokes, and have become a huge part of our popular culture, yet no one has produced a film about this hilarious and explosive subject. Until now…

Aaron Godfred, a Linfield and UO alumnus, wrote and directed Little Blue Pill, and shot much of the film in Portland. The Pittock Mansion, Voodoo Doughnuts, The Rheinlander, and other iconic Portland locations appear, and the cast and crew includes numerous Portlanders.

Tickets to the 9pm premiere are only $8 (buy them in advance here). For more information on the film and the premiere visit the Little Blue Pill website or Facebook page, and watch the trailer below!