Update: @ChrisHarley on Twitter pointed to this nifty video visualizing US expansion through post offices by Derek Watkins, which makes it unclear whether Astoria, Oregon City, or Salem served as home to the first post office west of the Rockies. Oregon City shows up first in the lookup tool hosted by the US Post Office: March 29, 1847. The same tool shows Salem’s post office established on November 8, 1849. But Salem Online History suggests Salem’s was established in 1846, though no day and month is specified. Meanwhile Earliest Oregon Postoffices as Recorded at Washington (by Lewis A. McArthur in the Oregon Historical Quarterly Vol. 41, No. 1 – March 1940), which used as its source Book 19 of “a series of volumes in the office of the Division of Postmasters’ Appointments at the Post Office Department in Washington, D. C.”, shows the establishment dates as follows: 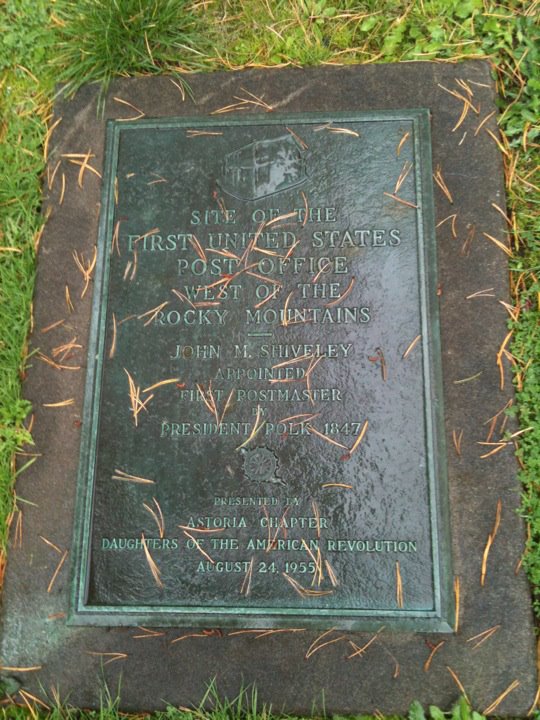 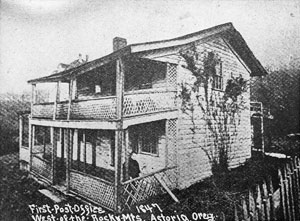 The first U.S. Post Office west of the Rocky Mountains opened in Astoria, Oregon on March 9, 1847.

But more interesting than the post office building (pictured), is the man who served as the first postmaster.

Oregon pioneer John Shively had settled in Astoria in 1844 but was kicked out by the Hudson’s Bay Company after a property boundary dispute. In 1847 he was living in Washington D.C. when he was appointed postmaster of the new Astoria post office by the U.S. Postmaster General.

Somewhat of a flighty fellow, he served in that capacity only until 1849, when the draw of newly discovered gold in California became too strong. In 1850 he returned to Astoria, assuming he could reclaim his job (he lost all his gold rush earnings in a shipwreck), but another fellow had taken the job in his absence. Shively did okay though, he got jobs as county surveyor and road commissioner, and after chasing a southern Oregon gold rush he returned once again to Astoria a relatively wealthy man.