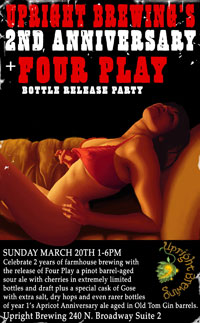 In addition to the extremely rare Four Play one of only 3 kegs on draft Upright will also be releasing something even more rare in bottle, last years Apricot Anniversary Ale aged in Ransom Spirits Old Tom Gin Barrels of which there are less than 3 cases of 750ml bottles. To top it off look for a special cask of this years edition of the World Beer Cup award winning Gose stuffed Dry Hops and extra Salt.

Four Play is the star of the show; it’s a Belgian-y beer based on Upright’s wheat beer (Four) that is pinot noir barrel-aged for a year with cherries, souring yeasts, and bacteria. The 2011 batch consists of a mere 3 kegs and 67 cases.

Upright recently installed three new tanks, one of which will be dedicated to a new hoppy German-style pilsener call Engelberg Pils. The two other tanks will brew more of the delicious, astounding, and curious one-off beers that Upright Brewing is known for.

The festivities extend from 1pm until 6pm in the tasting room.

And read all about the Four Play label art controversy at the New School beer blog: Four Played Out!