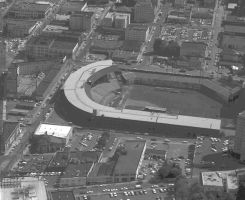 Join Michael Orr at the Architectural Heritage Center on Saturday, March 26, 2011 as he presents Portland’s Stadium: The Many Lives of Civic Stadium:

From its earliest days as the athletics field for the Multnomah Athletic Club to its status as a dog track, football stadium, baseball field, soccer pitch, ski-jumping arena and nearly every other sport, Portland’s stadium has been a constant downtown presence for over 100 years. The stadium was built in 1926 and has undergone facelifts, additions, and name changes ever since. Whether known as Multnomah Field, Multnomah Stadium, Civic Stadium or PGE Park, amateur and professional sports have long had a home on SW Morrison Street.

Michael is managing writer and editor at the Portland startup FC Media, which is dedicated to documenting Timbers history. He is currently writing a history of the inaugural 1975 NASL Portland Timbers season. Michael also hosts the radio show mao’s Football, maintains a blog of the same name, and writes for the Timbers blog at The Offside and other publications.

The presentation takes place at the AHC (701 SE Grand) from 10am until 11:30am. Tickets are $13 for members, $18 for the general public. As many of these presentations sell out, pre-registration is recommended!