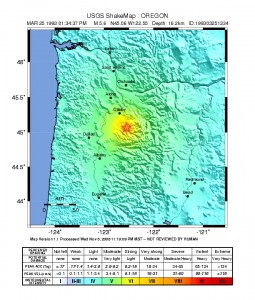 One of the largest earthquakes in [the state of] Oregon’s history occurred at 5:35am on Wednesday, March 25, 1993. It’s known officially as the Scotts Mills Earthquake, but locally as the Spring Break Quake.

The 5.6 magnitude quake was centered about 3 miles east of Scotts Mills (a tiny community about 6 miles east of Mount Angel), and was felt as far north as Seattle and as far south as Roseburg. The dome of the Oregon State Capitol shifted and cracked and masonry work crumbled on several buildings around the region, but otherwise there was little major damage.

Portlanders, such as myself at the time, were jostled out of bed. At the time I lived in a tiny studio apartment in the basement of an old four story building in SE Portland. The shaking jolted me awake. I grabbed my bathrobe and ran outside; stood crouched with arms out for balance, waiting for more. But that was it – just barking dogs and car alarms. That was the last night I slept in the nude.