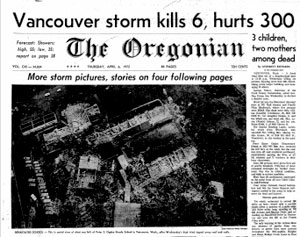 On April 5, 1972 a spring thunderstorm’s high winds damaged a lumber warehouse in Tigard. As the storm traveled northeast across town, it broke branches and uprooted trees, and spawned a tornado.

The tornado first touched down on the banks of the Columbia River, damaging four boats moored off the 3300 block of NE Marine Drive. Dozens of cabin cruisers were tossed about. A dry dock, boat houses and other buildings were damaged before the funnel cloud made it to open water and proceeded across the river, where the real damage began.

On April 6, 1972 The Oregonian tallied the damage:

Worst hit was the Waremart discount store on NE 72nd Avenue and Fourth Plain Boulevard, where five persons were killed . . .

The Sunrise Bowling Lanes, across the street from Waremart, was smashed flat, killing Mrs. Sharon Lucille Graser, 30, of 2510 NE 83rd St., Vancouver, as she worked in the Nursery.

Peter Skene Ogden Elementary School at 2212 NE 65th Ave. received the full fury of the wind, but the roof was torn off and scattered northward, miraculously sparing the lives of all 541 students and 21 teachers in their busy classrooms.

The 1972 Portland/Vancouver tornado was the most devastating tornado in Oregon’s recorded weather history. Six people were killed and over 300 were injured.