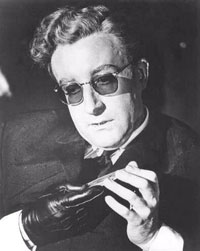 Cort and Fatboy are teaming up with the Roseway Theater (7229 NE Sandy) to bring you new screenings of classic films. The first edition of Classics at the Roseway, kicks off this Friday, April 8, 2011, with Dr. Strangelove or: How I Learned to Stop Worrying and Love the Bomb:

Restored and remastered, Kubrick’s classic satire will be digitally projected in its original aspect ratio with the finest audio/visual presentation available in Portland, thanks to owner Greg Wood’s renovation of The Roseway Theater. “Strangelove” is just as jarring and ridiculous now as it was then, a political thriller completely unafraid to subvert scares to show how relentlessly silly the Cold War was, at its core, with defining turns from an unhinged George C. Scott, Sterling Hayden, and probably the best performance Peter Sellers ever gave.

The Roseway Theater is all ages. Tickets are $7 and can be purchased at the theater or online. The screening begins at 8:30pm.