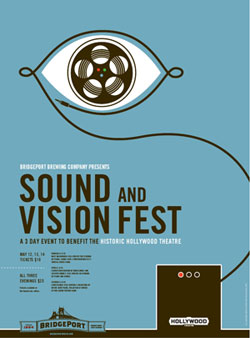 The Sound and Vision Fest, a benefit for Portland’s historic, and non-profit, Hollywood Theatre, takes place Thursday through Saturday, May 12 through 14, 2011.

A three day festival featuring works in progress by Michel Gondry and Lance Bangs, new work from Spike Jonze and Matt McCormick, a rare screening of “Who Took the Bomp: Le Tigre on Tour,” as well as performances by Eluvium, Goodnight Billygoat, the Corin Tucker Band and Hurry Up (featuring members of the Thermals).

On Thursday filmmaker Matt McCormick curates an evening that includes a live performance by Eluvium and screenings of short films by Vanessa Renwick, Karl Lind, and others.

Carrie Brownstein hosts Friday – highlight of the evening include a screening of Who Took the Bomp: Le Tigre on Tour and a performance by Hurry Up.

And on Saturday night, Lance Bangs hosts and screens an excerpt from his new documentary on the band Slint. Shorts by Michel Gondry and Spike Jonze will also be shown, and The Corin Tucker Band will top off the evening.

Each night festivities begin at 7pm at the Hollywood Theatre (4122 NE Sandy). Visit the Sound and Vision website for more details. Tickets are $10 each night.