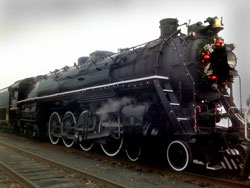 The Farewell to Steam Excursion attracted 1375 passenger who piled into 21 cars in Portland for a trip to Wishram, Washington and back (The Oregonian, 21-May-1956).

The train’s engineer, J. T. Craine, Vancouver, Wash., whose 38 years of railroading included service as fireman on No. 700 that morning in 1938 when it made its maiden run over SP&S tracks, was definite in his opinions. A loving hand on 700’s controls, he grieved.

“I still like this old girl. You feel like you’ve got something to work with in a steam engine. Handling a diesel is just like sitting in a streetcar.”

The 700 was placed on the scrap line after the trip . . . but that was not the end of her. The SP&S 700 is now owned by the City of Portland, and is maintained by the Oregon Rail Heritage Foundation. The locomotive was declared a “historic place” in 2006, and is still occasionally enlisted for special occasions, like the annual Holiday Express